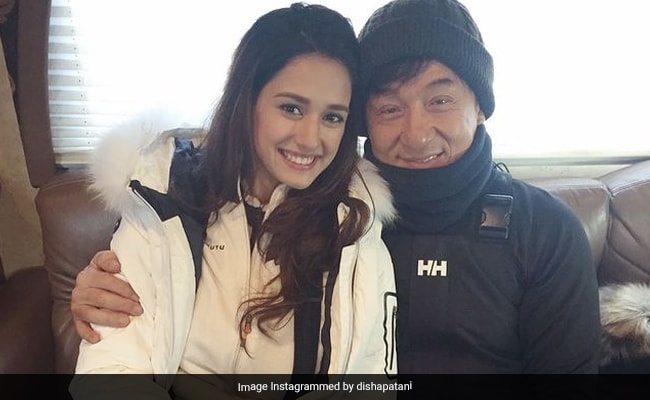 New Delhi: Global icon and legendary actor Jackie Chan is celebrating his 67th birthday today and actress Disha Patani has the sweetest birthday wish for him. The actress extended her birthday wishes to Jackie Chan through her recent Instagram post. Disha Patani shared a picture of herself and the birthday boy on the special occasion. The picture features Disha and Jackie sitting on a couch. The two can be seen sporting bright smiles on their faces in the picture. “Happiest bday to the living legend and one of the most amazing human beings I’ve ever known Jackie Chan love you taguuu,” she wrote in the caption of the post.

While Disha can be seen wearing white trousers with a matching jacket and a T-shirt underneath, Jackie Chan can be seen wearing black trousers and a matching jacket in the picture. Disha and Jackie enjoy a great friendship and they have co-starred in 2017 Chinese action film Kung Fu Yoga. Besides Disha, the film also starred Bollywood celebrities Sonu Sood and Amyra Dastur.

Kung Fu Yoga completed 4 years in January this year. Celebrating the film’s anniversary, Disha Patani had shared a picture of herself with Jackie Chan on Instagram. “Happy 4 years of Kung Fu Yoga. Love you Taguu,” she wrote in the caption of the post.

On Jackie Chan’s birthday last year, Disha had shared a similar post and had complemented it with a long note dedicated to him. Disha had shared a picture from her first meeting with the legendary actor. “Happiest b’day taguuu. This was the first time I met you, I remember being so nervous but it turned out to be the best day of my life, getting an opportunity to work with my “superhero” is the best thing that has ever happened to me,” she wrote in the caption of the post.

In terms of work, the 28-year-old actress was last seen in Mohit Suri’s Malang co-starring Anil Kapoor, Aditya Roy Kapur and Kunal Kemmu. She will next be seen in Prabhu Deva’s Radhe: Your Most Wanted Bhai opposite Salman Khan.

Price: (as of - Details) The Lenovo Tab M10 HD is one impressive family tablet. It is packed with powerful Qualcomm Snapdragon quad-core...
Read more

Price: (as of - Details) The Lenovo Tab M10 HD is one impressive family tablet. It is packed with powerful Qualcomm Snapdragon quad-core...
Read more