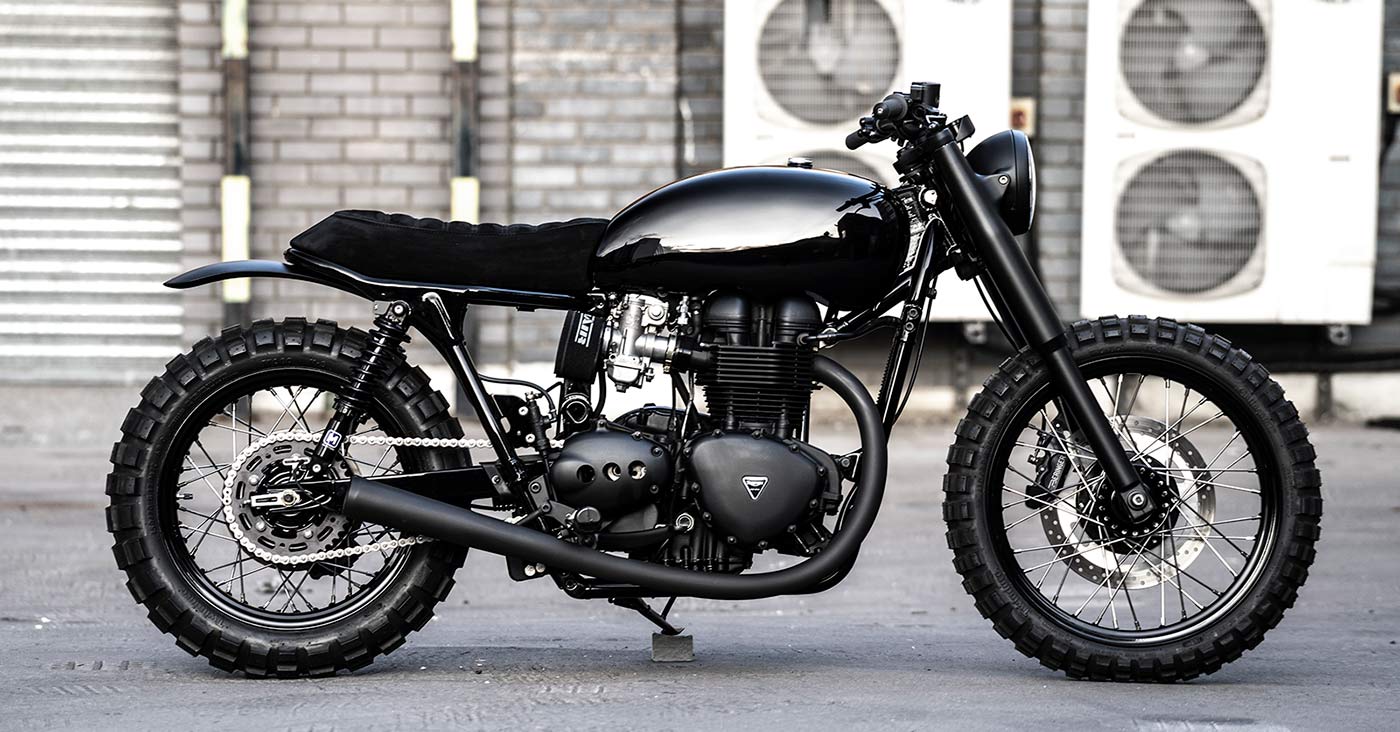 Triumph’s current modern classics are wonderfully designed machines that recall the marque’s history, while offering contemporary performance. But their complex electronics and liquid-cooled, fuel injected motors make them notoriously hard to customize. Superficial changes are a walk in the park, but going deep requires a master’s degree in engineering.

The thing is, Triumph’s retro range has actually been around for almost two decades—and when it first launched, the bikes were far simpler. This dark and handsome stunner is a 2008-model Bonneville, which is powered by an air-cooled, carbureted twin, and devoid of any fancy electrics. So it lent itself to the Scandinavian level of minimalism that Auto Fabrica had in store for it. 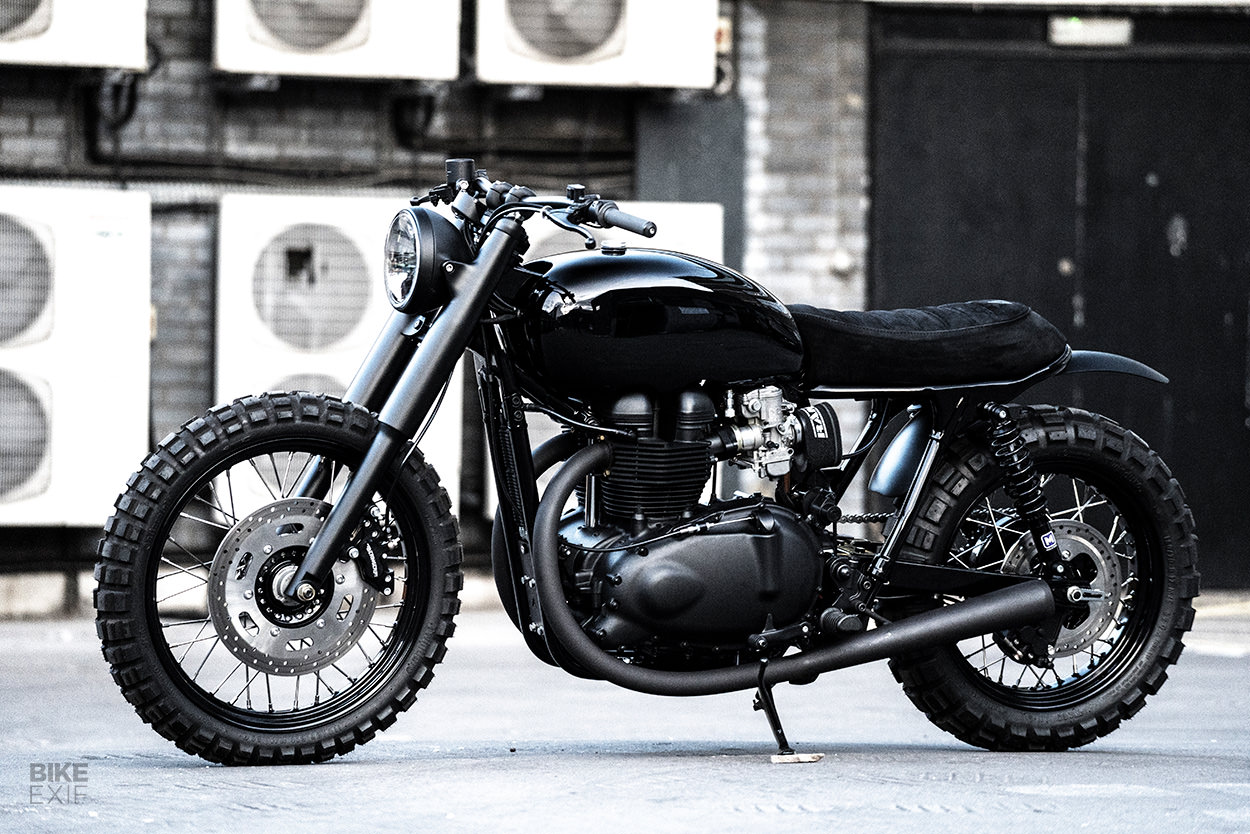 The English workshop, run by supernaturally talented brothers Bujar and Gazmend Muharremi, landed the commission from an existing customer. “There was a choice between a classic Triumph or a modern one,” explains Bujar, “and an open brief for us—other than it needed to start easily. The solution was to use a 2008 Bonnie, which still retains much of the simplicity that comes with carbs and a lack of bulky wiring.”“We learned a huge amount from the ‘Type 5’ Bonneville we worked on before, when we first started Auto Fabrica, and we wanted to use that learning on this particular build. We had a few variants of the design concept, but our client chose this all black option which was our favorite too.” 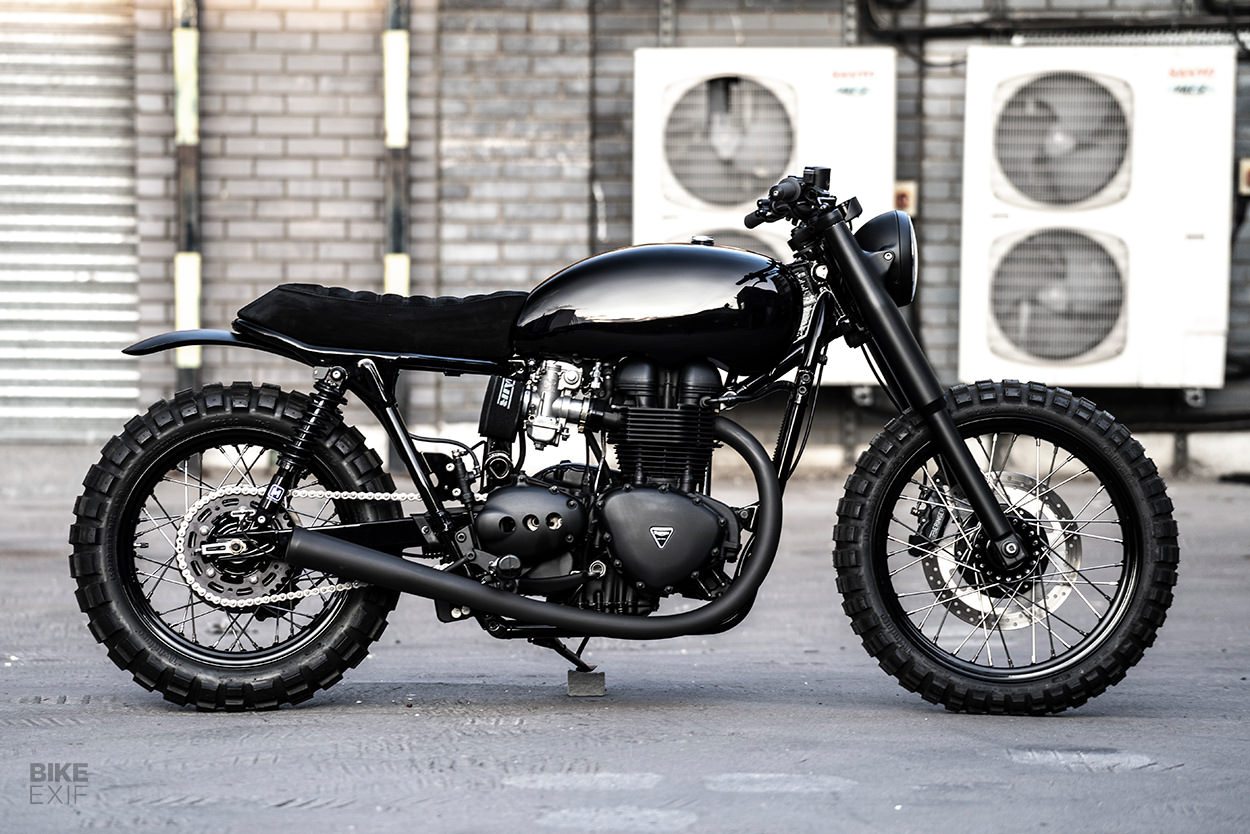 With the bike on Auto Fabrica’s bench and stripped down, the OEM fuel tank was the first part to get the cut. “We always found it that it just kind of sat on top of the frame rather than being integrated nicely,” says Bujar. “In order to have one line from seat to tank we needed to drop the tank lower—so this meant we had to make a new fuel tank.”The new tank does indeed sit much lower, thanks to some clever thinking. Auto Fabrica designed it with cutouts for the motor and carbs to help slam it. Then they added a recess at the back, so that the seat would run directly ‘into’ the tank. 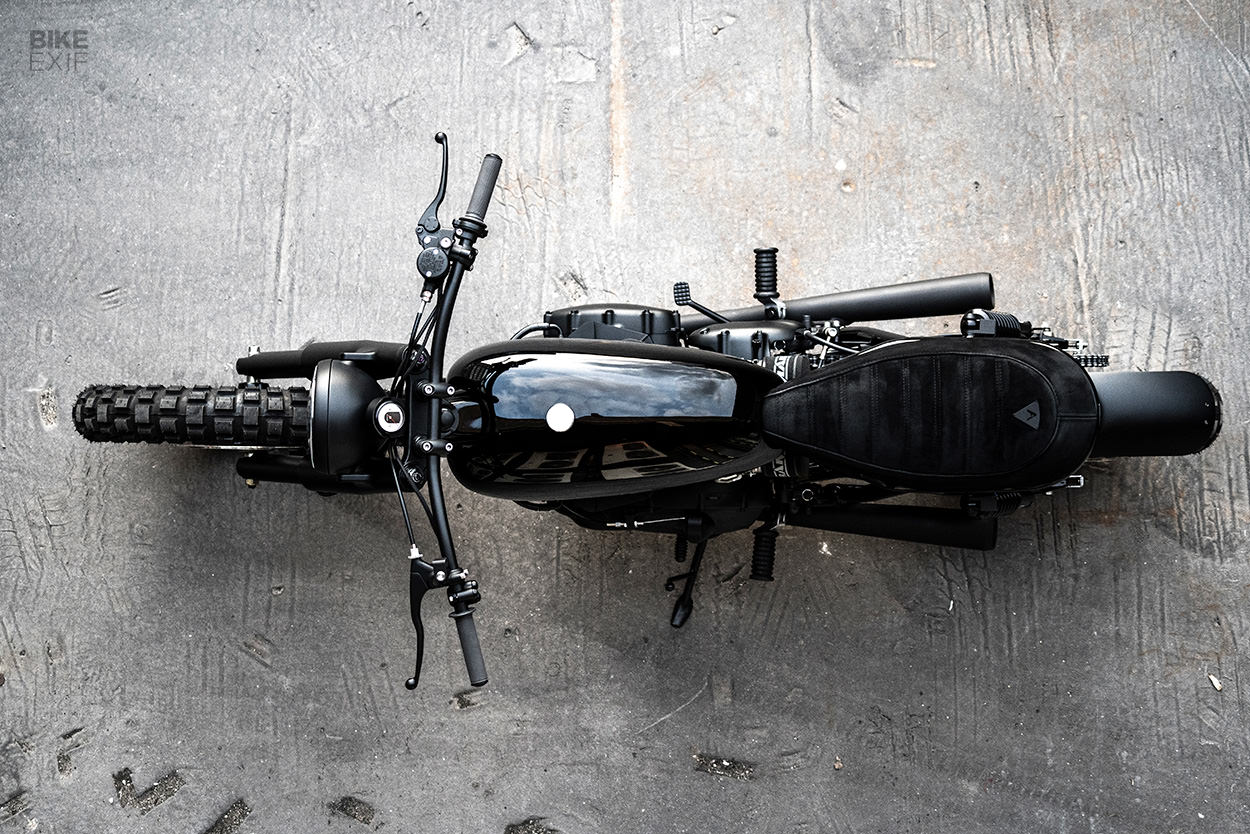 It’s an elegant design, complete with a neat little knurled gas cap, and complemented by a generously padded suede seat. The lads cut-and-looped the Bonneville’s subframe, then sunk a small LED taillight into the back of it. A new rear fender finished off the Triumph’s minimal bodywork.

Up front, Auto Fabrica wrapped the front forks in a set of custom fork covers. They started by 3D modeling and printing the top sections, and hand shaped the lower bits using stainless steel. The two sections were then bonded together and finished in black. 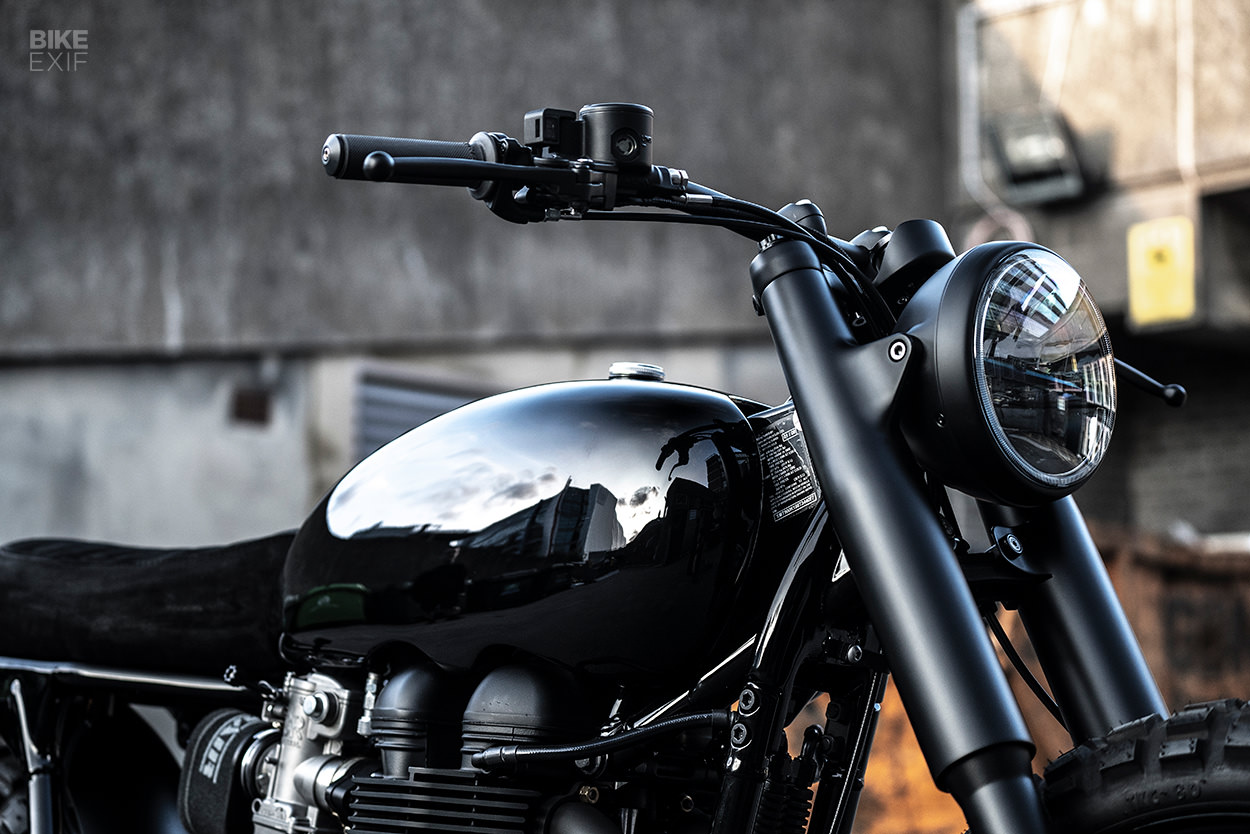 The fork covers include tabs to hold the new headlight—a 7” LED housed in a custom bucket. The turn signals at both ends are custom LED units in 3D-printed housings; they’re stealthily mounted on the handlebars (front), and on the upper shock mounts (rear).

The cockpit’s set up with new bars and grips, a Motogadget speedo in a custom housing, and Motogadget switches. Auto Fabrica also rewired the whole bike around a Motogadget control box for good measure. 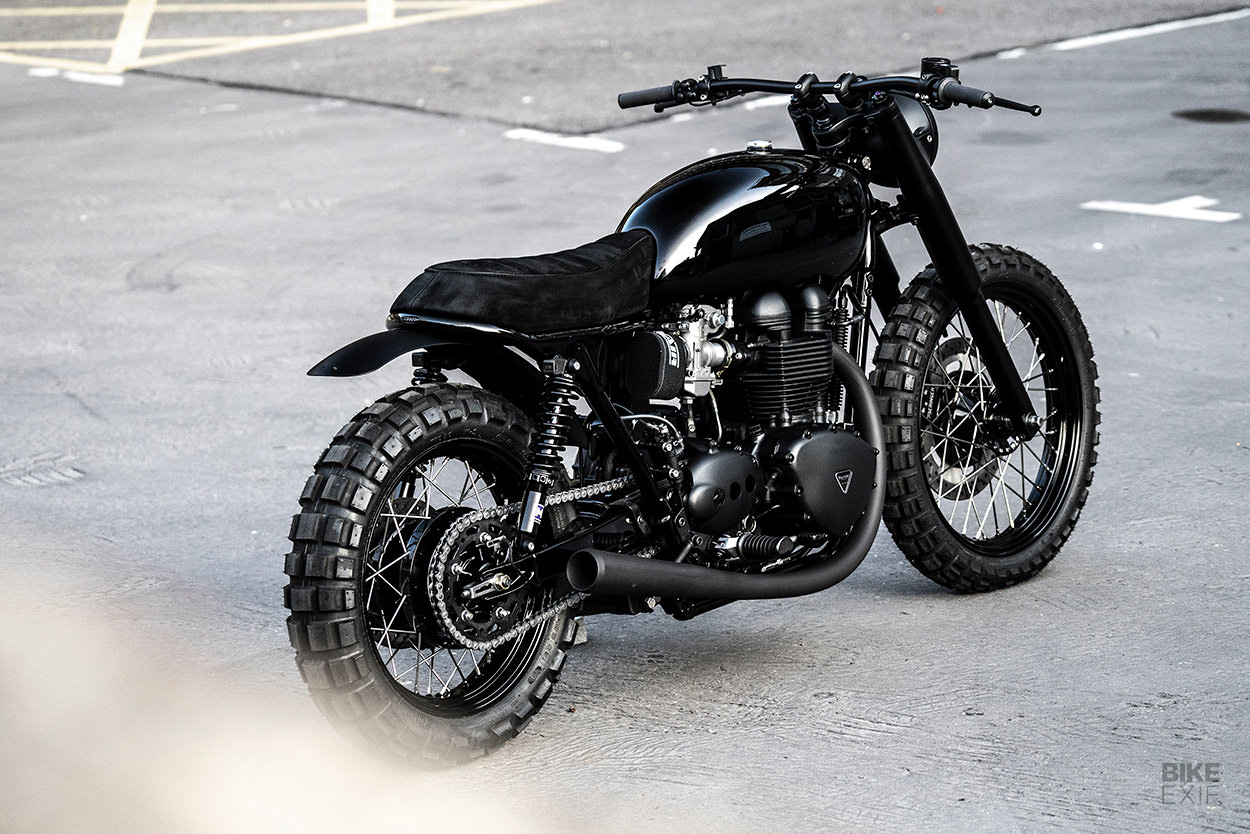 There are sneaky upgrades hiding elsewhere. The wheel rims and hubs are stock, but they’ve been re-laced with stainless steel spokes (and redone in black). Plus the front brake’s been upgraded to a top-shelf Beringer setup.

Auto Fabrica turned to Maxton, a frequent collaborator, for the Triumph’s suspension upgrades. The forks are kitted with new internals, and the rear’s propped up on a set of custom-built Maxton shocks that were specc’d for the client’s weight. “Subtle OEM styling with amazing performance,” adds Bujar. 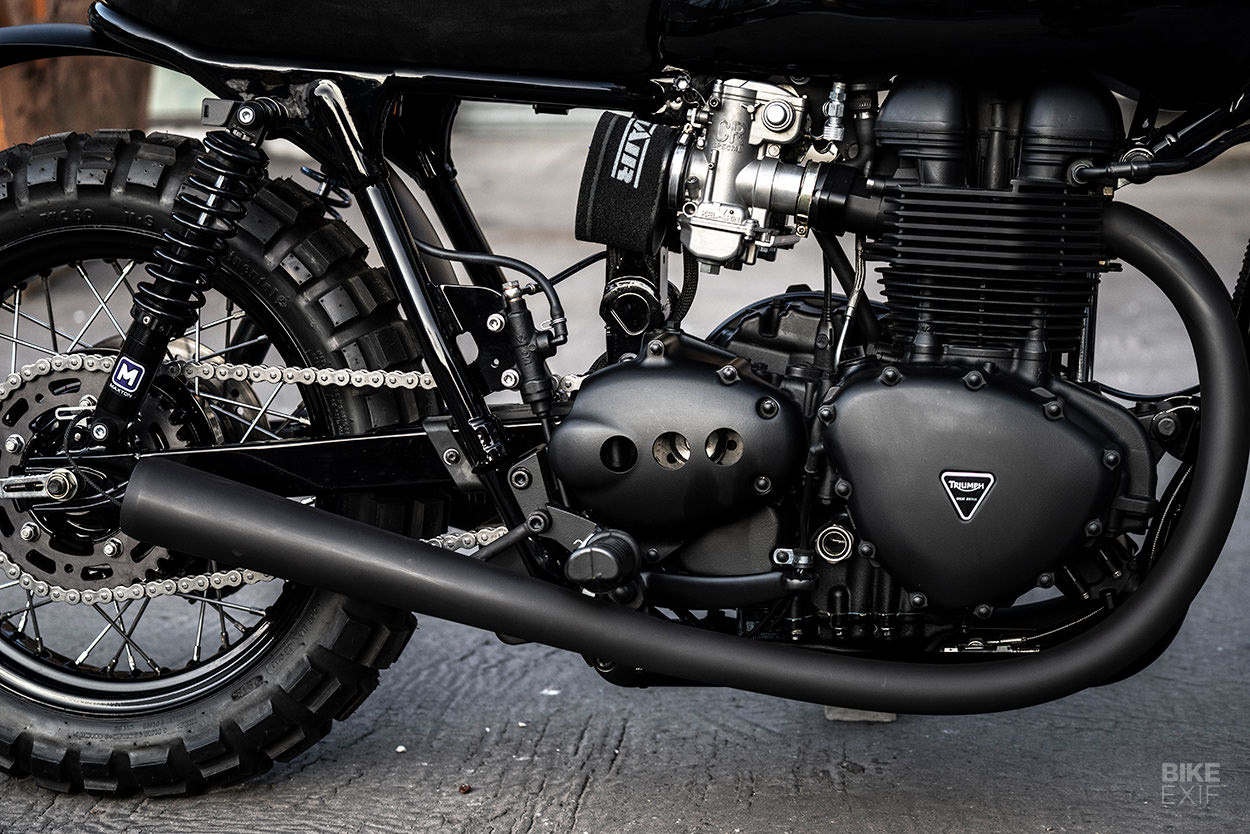 Moving to the motor, the brothers gave it a good checking over, but didn’t fuss with the internals. They did add a pair of Keihin CR carbs with foam filters and a fresh tune though, to give the 865 cc parallel twin a little more grunt. They also sand-bent a stainless steel exhaust system in their signature swooping style, with a pair of neatly blended megaphone mufflers.

“The bike pulls really well,” says Bujar, “and has the looks and handling (even on TKC80s) to match.” 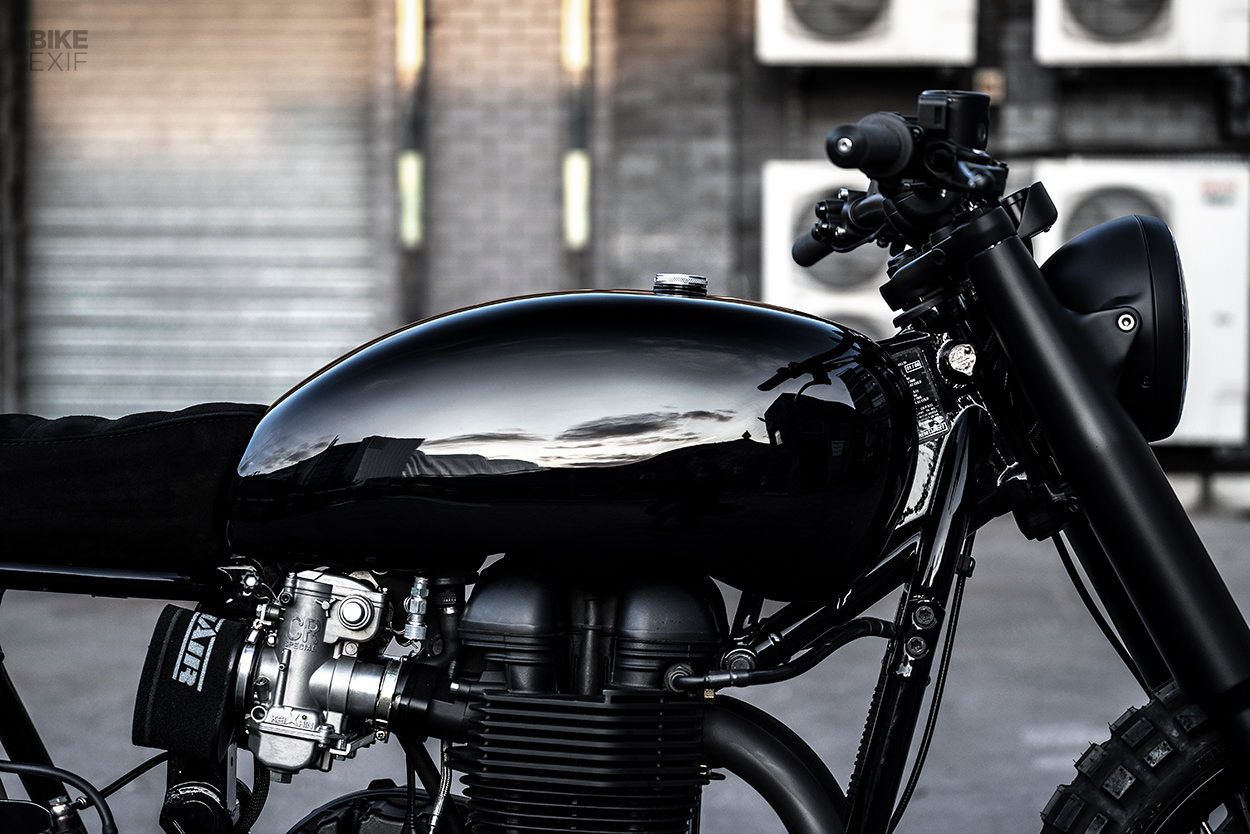 The ‘Type 20’ Bonneville’s livery is tasteful, mixing matte, satin and gloss blacks flawlessly. And as we’ve come to expect from the Muharremi brothers, it looks clean enough to eat off.

This one’s obviously not for sale… but Auto Fabrica will build you one just like it, if you ask nicely. 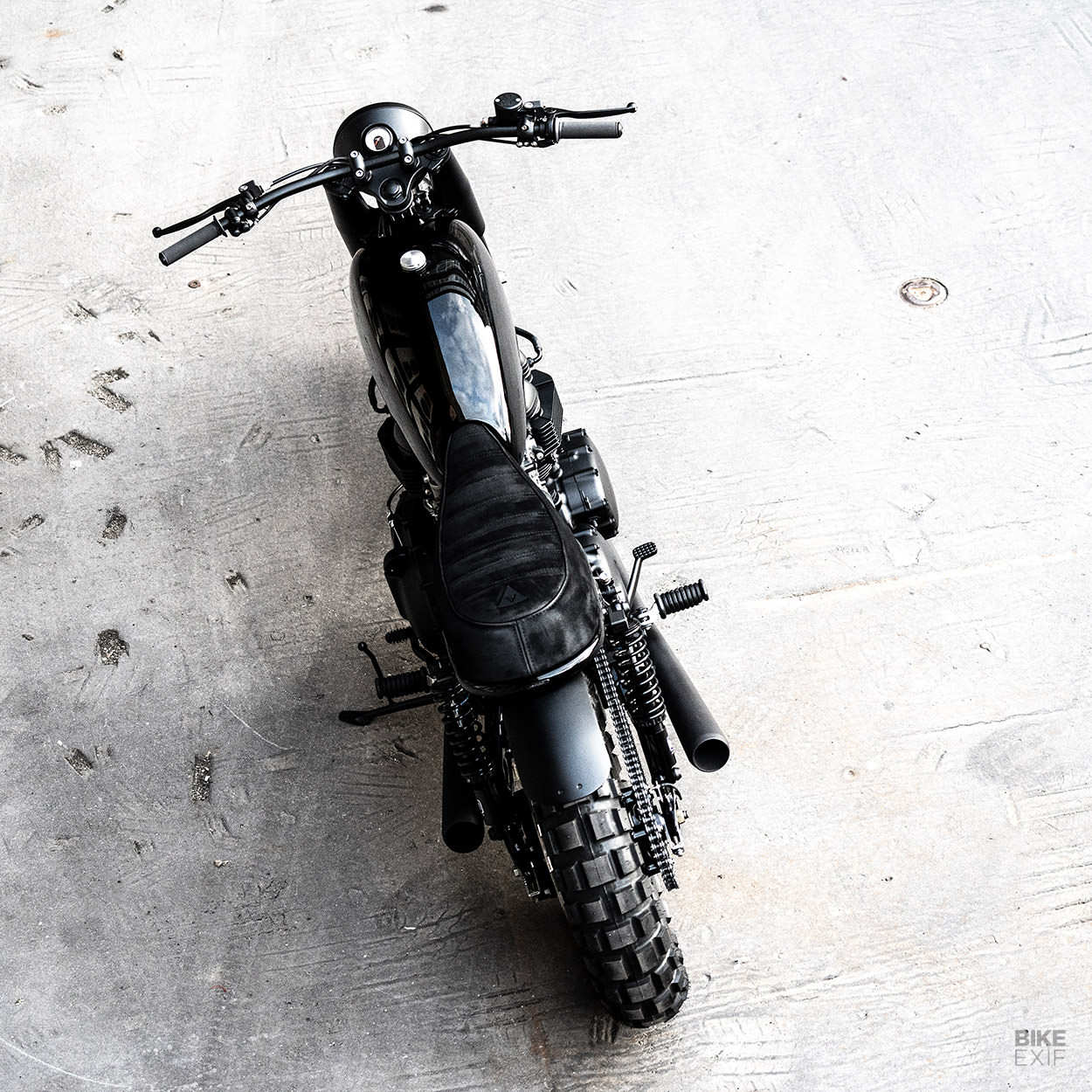 Gift-Wrapped Urus Is The Real Lamborghini You Wanted For Christmas

C7 Chevrolet Corvette Z06 to get enhanced warranty due to overheating