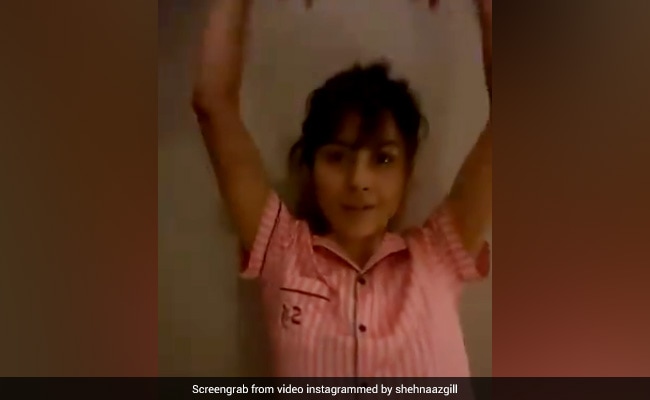 Shehnaaz Gill in a still from the video. (courtesy shehnaazgill)

New Delhi: Shehnaaz Gill and her shenanigans are too cute for words. Her latest Instagram post is proof of the same. The former Bigg Boss contestant and singer showed off her dance skills in a new Instagram Reels video. Shehnaaz, who picked a striped pink night suit for the clip, is seen grooving to the beats of Baila Conmigo by Selena Gomez and Rauw Alejandro. Her messy hair added some fun to her look. She kept her face fresh with no makeup. We absolutely love her candid vibe and natural look. Her Instafam couldn’t stop gushing and showered a lot of love on her video in the comments section.

A user wrote: “National Crush Shehnaaz.” Another said, “Most cute and adorable person.” Shehnaaz Gill often sets social media on fire with her cute and adorable posts. The actress is popular for her jovial personality and no-nonsense nature. Recently, she shared another Instagram Reels video in which she looked like an absolute doll. The video had Justin Bieber’s Intentions playing in the background. Her fans were left asking for more.

In terms of work, the 28-year-old has announced that she will play a pivotal role in the upcoming Punjabi film, Honsla Rakh co-starring actor-singer Diljit Dosanjh. The shooting of the film recently wrapped up in Canada. Directed by Amarjit Singh Saron, the film also stars Sonam Bajwa and Shinda Grewal in important roles. Honsla Rakh is all set to release on October 15, 2021.

Shehnaaz has appeared in a few Punjab films such as Kala Shah Kala, Sat Shri Akaal England and Daaka. She is also known for her work in music videos. She appeared in the songs Bhula Dunga and Shona Shona alongside actor Sidharth Shukla. She gained followers across the country after her appearance on Bigg Boss 13.