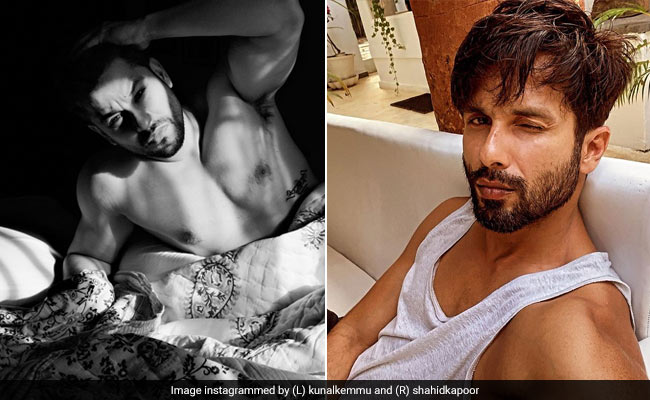 New Delhi: Has it ever happened to you that your friend pulled your leg for a picture that you posted on Instagram? If yes, then you might be able to relate to Kunal Kemmu. And that friend who pulled his leg is his BFF Shahid Kapoor. Here’s what happened. Kunal posted a monochromatic photo of himself on the platform as a sneak-peak of how his “Tuesday Mood” has been like. In the picture, the Malang actor is showing off his chiselled body and a beam of sunlight is falling on him in a dark room. Kunal’s intense look in this one deserves a lot of praise.

Kunal wrote a poetic caption for his post. He wrote, “As the light seeps in to pull the darkness away…A little bit may get left behind each day…The lies may all be black and blue…But the truth is always in the Grey #thoughtsthatgothroughmyhead #blackandwhite #tuesdaythoughts #tuesdaymood.”

For those of you who don’t know, Kunal Kemmu and Shahid share a close bond and both of them keep giving friendship goals. They went on a bike trip in 2019 and we saw a few pictures from their vacation on Instagram back then. Shahid’s brother Ishaan Khattar also accompanied them on the trip.

Shahid had posted this photo with his “biker boys” from their trip in 2019. He wrote, “Happy vibes. Boys with their toys.”

Kunal had shared another picture from the trip. See it here:

In terms of work, Shahid Kapoor is gearing up for the release of the upcoming film Jersey. The movie is a Hindi remake of a Telugu film of the same name, which was released in 2019. Shahid was last seen in the 2019 film Kabir Singh. Kunal Kemmu, on the other hand, appeared last in Lootcase, a 2020 film.

Price: (as of - Details) pTron Tangent Lite’s innovative magnet design, you can wear it around your neck like a necklace, which decreases...
Read more
Load more