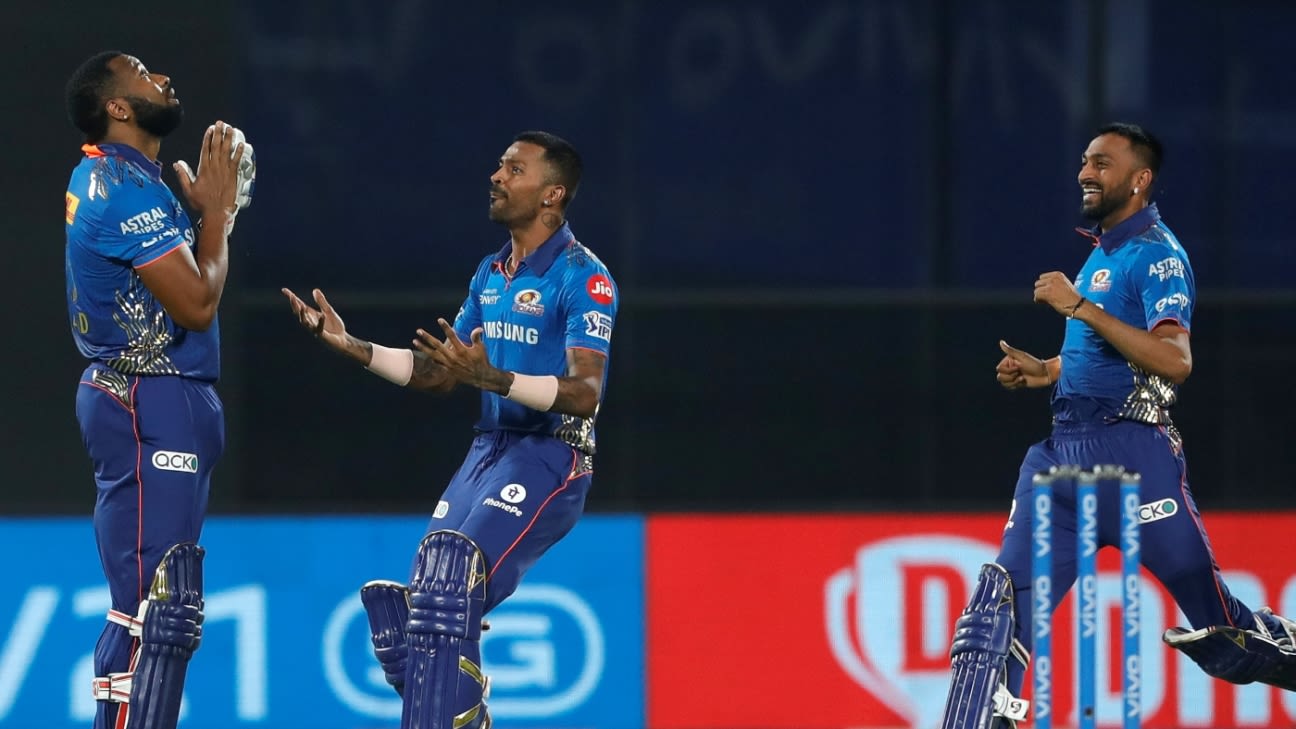 Kieron Pollard‘s stunning onslaught took the Mumbai Indians to an improbable win over the Chennai Super Kings in a run-fest in Delhi. The defeat also ended the Super Kings’ five-match winning streak.

Chasing 219, Rohit Sharma and Quinton de Kock gave Mumbai a start of 71 in 7.4 overs. After that it was all Pollard, who smashed an unbeaten 87 off 34 balls. During the course of his knock, he muscled six fours and eight sixes and, with a little bit of help from Krunal and Hardik Pandya, brought it down to 16 needed from the final over.

With Dhawal Kulkarni at the other end, Pollard decided he was going to face all six balls from Lungi Ngidi. He refused a single on the first ball. The next was almost a perfect yorker that Pollard managed to squirt it between his legs for four.

Ngidi then ended up bowling three full tosses in a row. Pollard pulled the first one for four to fine leg before refusing a single on the next. With eight needed from the last two balls, he smashed the third of those full tosses for a six. Ngidi bowled the final ball in the blockhole but Pollard dug it out towards the right of long-on and scampered back for the second to pull off the second-highest successful chase in the IPL.

Earlier, Ambati Rayudu played a similar knock to Pollard’s, blazing 72 not out off 27 balls on the top of the breezy half-centuries from Moeen Ali and Faf du Plessis.

After being put in, du Plessis (50 off 28) and Ali (58 off 36) added 108 in 61 balls overs for the second wicket before the Super Kings lost three wickets for four runs. But there was no respite for the Mumbai bowlers as Rayudu smashed seven sixes and four fours to propel the Super Kings to 218 for 4.

Such was Rayudu’s impact that the last six overs produced 92 runs despite Jadeja crawling at a run-a-ball 22 at the other end. The two added 102 in 48 balls in an unbroken stand for the fifth wicket, making it the first instance in the IPL, and only the tenth in all T20s, that an innings featured two century stands.

In all, the Super Kings hit 16 sixes – the most by any team against Mumbai. Jasprit Bumrah went for 56 from his four overs, his most expensive spell in T20 cricket. Despite them having such a day in the field, Pollard ensured Mumbai finished on the right side.

du Plessis, Ali give Super Kings brisk start
Ruturaj Gaikwad opened his account with a crisp cover drive off Trent Boult off the second ball of the match. But Boult struck back two balls later when Gaikwad closed the face of the bat a touch early to offer a dolly to backward point.

Kulkarni, though, started waywardly from the other end and du Plessis didn’t miss out, glancing the first ball of the over for four. Later in the over, he skipped down the ground to hit the bowler over long-off for a six. In the next over, Ali timed Boult for a six and a four off successive balls. When Sharma turned to Bumrah in the fifth over, Ali clipped him over square leg for another six.

Continuing in his free-flowing manner even after the powerplay, Ali smashed Jimmy Neesham over midwicket for his third six of the innings. Neesham had a chance to make amends in the same over but could get only fingertips to a return catch du Plessis offered.

There was no stopping Ali though. He struck two more sixes in the next two overs and brought up his fifty in 33 balls. By the end of the 10th over, the Super Kings had 95 on the board.

Mumbai strike back after Ali, du Plessis fifties
Sharma knew Mumbai needed a wicket and he went back to Bumrah for the 11th over. du Plessis welcomed him by smashing the first three balls of the over for six, six and four but Bumrah hit back by dismissing Ali with a short of a length delivery. The batter tried to steer it towards third man but the around the wicket angle cramped him and de Kock pouched a simple catch.

In the next over, Pollard dismissed du Plessis, soon after he had reached his fifty off 27 balls, and Suresh Raina with successive, slower balls. du Plessis miscued a scoop and Raina holed out to deep square leg.

Pollard almost had Jadeja too, twice, in his second over. On the first occasion, Jadeja got the on-field lbw call overturned on review as replays confirmed the ball had pitched outside the leg stump. The second time, Pollard had himself to blame as he couldn’t hold on to a return catch with his outstretched left hand.

Rayudu runs riot
Rayudu has had 64 runs in four knocks before this game. By the end of the Super Kings innings, he had more than doubled his tally.

Despite the mini-collapse in the middle overs, Rayudu didn’t hesitate to play his shots. Rahul Chahar was pulled over deep square leg in the 15th over and Kulkarni was pummeled for back-to-back sixes in the 16th. Even Bumrah and Boult weren’t spared as Rayudu smashed the duo for three sixes and two fours in two overs.

Rayudu targeted the leg side in particular. Out of his 72 runs, he scored 45 on the leg side, with five sixes and a four. The last ball of the innings summed up Mumbai’s day in the field: Rayudu slashed Kulkarni towards deep point but Suryakumar Yadav, moving to his left from sweeper cover, not only dropped the catch but also conceded a boundary.

Mumbai slip after solid start
Mumbai started aggressively, and despite Sharma not looking at his best, de Kock and he took the side to 58 for no loss at the end of the powerplay.

Shardul Thakur broke the stand in the eighth over when Sharma holed out to deep extra cover for 35. In the next over, MS Dhoni latched onto Yadav’s inside edge off Jadeja. When Ali had de Kock caught and bowled for 38, Mumbai had slipped from 71 for no loss to 81 for 3 in the space of 13 balls.

Pollard takes Mumbai home single-handedly
With 138 needed from the last 10 overs, Mumbai knew there was just one way to go about it, and in Pollard, they found the man to pursue the Herculean task. He muscled Jadeja for three sixes in the 13th over before smashing two more off Lungi Ngidi in the next. By the end of 14 overs, Mumbai were 130 for 3. At the same stage in their innings, the Super Kings were 126 for 4.

Pollard raced away to fifty in 17 balls, the fifth joint-fastest in the IPL, and reduced the equation to 66 required from the last five overs.

Krunal was on 17 off 17 balls before slogging Ngidi for two fours and a six in the 16th over. In the next over, Sam Curran though conceded just two apart from dismissing Krunal to leave Mumbai requiring 48 from the last three overs.

du Plessis dropped Pollard in the 18th over, which produced another 17 runs. Hardik smashed Curran for two sixes on the first two balls of the next over but Curran sent back both Hardik and Neesham in the next four balls to keep the game open. Pollard then took it all on himself to see Mumbai home.

Hemant Brar is a sub-editor at ESPNcricinfo