On Tuesday morning, actor Kangana Ranaut’s Twitter account was suspended for repeatedly violating the rules of the social media platform. Hours after her suspension, designer Anand Bhushan who owns the Anand Bhushan Label announced that they do not support hate speech and hence will not be associated with the actress in any capacity. Now Kangana’s sister Rangoli Chandel has said that she will sue the fashion designer.

Rangoli shared a note on her Instagram stories regarding Anand Bhushan’s announcement to cut professional ties with the actress. “This person Anand Bhushan is trying to get mileage on Kangana’s name we are not associated with him in anyway we don’t even know him, many influential handles are, tagging him and dragging Kangana’s name with his brand, Kangana charges crores for any brand endorsements but editorial shoots are not brand endorsements, neither we choose or select those clothes, magazine editors pick those ensemble looks,” she wrote.

This small time designer is using India’s top actress name to promote himself I have decided to sue him he will have to prove in the court how and where we had any endorsement with him now that he is claiming to disassociate himself … see you in the court @anandbhushan” Rangoli further wrote. 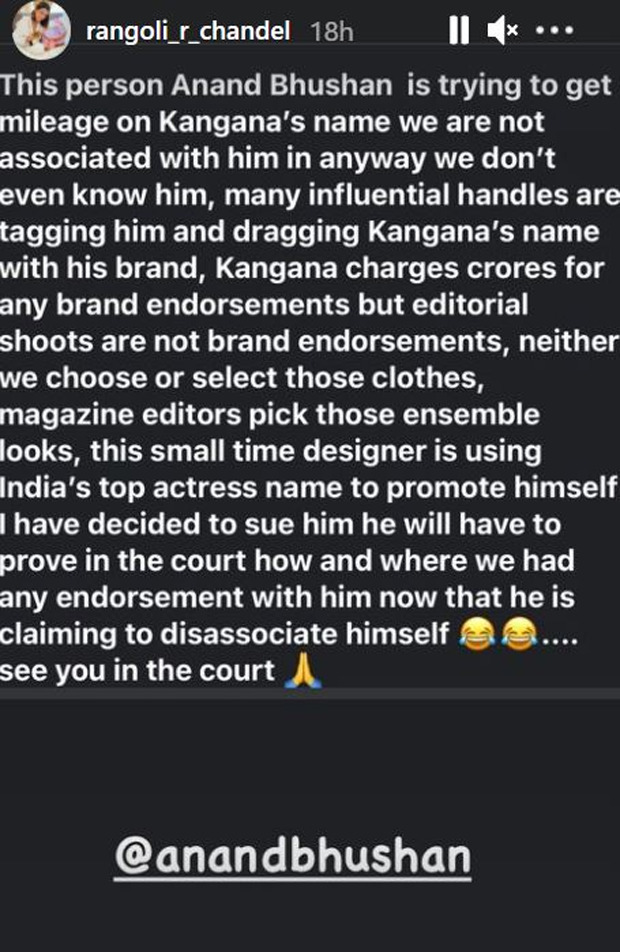 In a statement shared on Twitter and Instagram, Anand said, “In view of certain events today, we have taken a decision to remove all collaboration images with Kangana Ranaut from our social media channels. We also pledge never to be associated with her in any capacity in the future. We as a brand do not support hate speech.”

ALSO READ: Designer Anand Bhushan pledges to never be associated with Kangana Ranaut; says they do not support hate speech