Home e! Movies Bollywood How It Began And How It is Going For Ekta Kapoor And...
e! MoviesBollywood 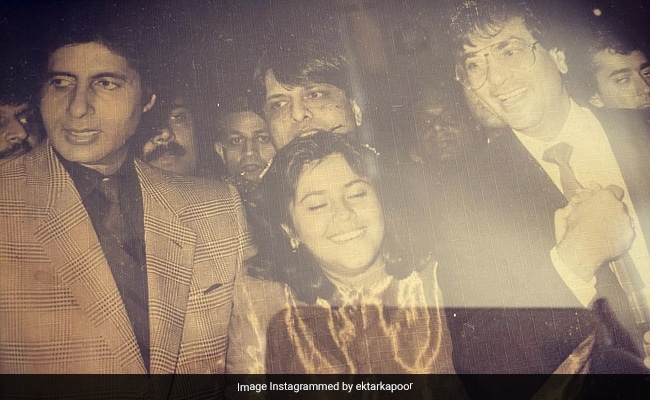 New Delhi: You know that feeling of adrenaline rush when one gets to meet their favourite star? Ekta Kapoor is currently experiencing it. Courtesy, Amitabh Bachchan. The producer collaborated with the megastar for her upcoming film Goodbye. An elated Ekta Kapoor has described the journey from being a die-hard admirer of Amitabh Bachchan to finally working with him. She posted a few photographs on Instagram to share her excitement with the world. The first pic shows a young Ekta smiling as her father Jeetendra and Amitabh Bachchan hold her hands. She captioned it, “This is how it started.” In the next frame, the movie title was revealed, “this is how it’s (hopefully) going. Finally, working with the only actor I’ve been waiting to work with…Who I spent my childhood obsessing over.” Ekta could not decide whether to address her idol as “uncle” or “sir.”

Ekta also uploaded stills of the clapboard and rituals performed on day one. Tahira Kashyap, Mukesh Chhabra were among the first ones to react to the news with emojis. The movie is directed by Vikas Bahl. It also features South actress Rashmika Mandanna. Goodbye will be Rashmika’s second Bollywood film after Mission Majnu, opposite Sidharth Malhotra.

Actress Ruchikaa Kapoor Sheikh, who is a part of the project, shared the same snaps with a heartfelt note. It reads, “Film number 3 of 2021 goes on the floors today! Day 1 of ‘Goodbye‘! One of our most special films…Full of emotion and entertainment and my 1st film with the legend Mr B! Can’t wait for the world to see this. Welcoming the new beginnings with Goodbye.”

Ekta Kapoor is also gearing up for the release of the web series Mai Hero Boll Raha Hu.

Price: (as of - Details) This fitness band will only work after installing fitness band application from play store.TO set time of watch...
Read more
Biometric devices

Price: (as of - Details) This fitness band will only work after installing fitness band application from play store.TO set time of watch...
Read more