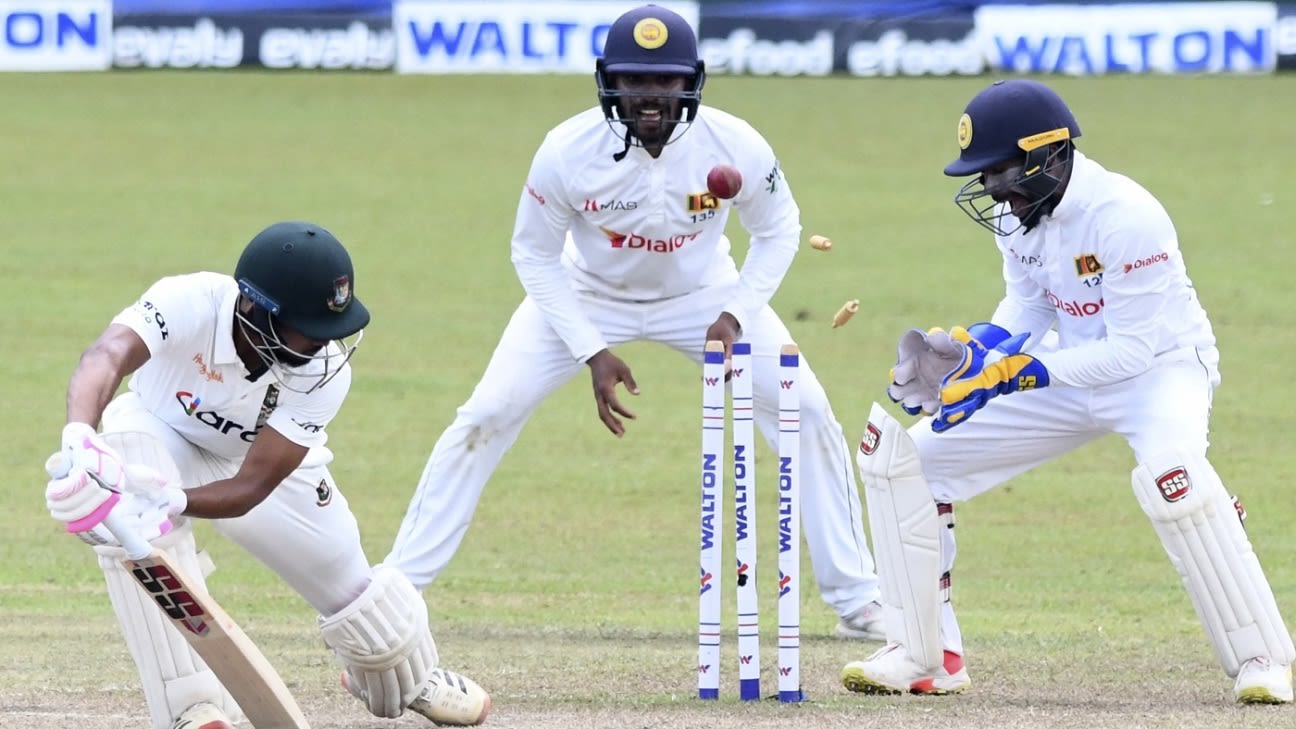 He also said Bangladesh couldn’t capitalise on starts, which eventually led to their 209-run defeat

A failure to capitalise on starts and plan against specific bowlers led to Bangladesh’s 209-run loss in the second Test against Sri Lanka, according to captain Mominul Haque. Left-arm spinner Praveen Jayawickrama scripted the home side’s win with an 11-wicket haul on his Test debut. That feat was especially impressive given it came against batters who face plenty of left-arm spin in domestic cricket and in the nets.

Picked ahead of Wanindu Hasaranga and two other more established left-arm spinners in domestic cricket, Jayawickrama showed subtlety in his bowling well beyond his experience in long-form cricket. He wasn’t rattled by Tamim Iqbal’s attacking start as he used the angles smartly to take his prized wicket. Jayawickrama also removed Mushfiqur Rahim by varying his length and degree of spin on the ball, apart from scalping Saif Hassan and Liton Das twice in the match.

“I don’t think we performed as a batting group except Tamim bhai in the first innings,” Mominul said. “He made a good start but we couldn’t capitalise on it. If we could have batted for three or four sessions, things would have been different. We batted six sessions in the first Test.

Bangladesh’s approach in the second innings, which included the top-five batters being dismissed between 24 and 40, was problematic. Rather than attempting to survive, the batters decided to counter the Sri Lankan spinners with bold shots. All batters in the top five hit at least four boundaries with a strike rate of over 50.

After the fourth day, Najmul Hossain Shanto said showing intent was necessary on this Pallekele pitch, but Mominul believed a balanced approach would have yielded better results.

Batting wasn’t the only problem for Bangladesh. Spinners Taijul Islam and Mehidy Hasan Miraz took just two wickets in 74 overs in the first innings. On the fourth morning, when the pitch was turning and gripping a lot more, they neither provided control nor wickets. Miraz went for 59 runs in his ten overs in the morning session, and had to be replaced by part-timer Saif Hassan twice. Taijul was steady in his 16 overs, but in a desperate situation, more was expected.

Mominul said a better performance from Bangladesh’s spinners could have made the difference for his side. “When results don’t go in your favour, you will notice where we lack, like their inability to spin the ball on a spinning wicket. In the first innings, there was no help in the wicket, but still they bowled in the right areas.

“It is difficult to take wickets on a pitch that doesn’t offer any help. You can keep the run-rate down between 2.5 to 3 per over. I think they bowled well in both Tests. Taijul bowled well in the second innings when they made 194 for 9. Of course they have to improve. I have expectations from the spinners, so I think they could have done better. It would have helped the team,” Haque said.

He also pointed out that the toss was extremely important in the context of how the Pallekele pitch eventually played out.

“The toss was very important in this Test. There was very little for the bowlers on the first two days, although our pace bowlers bowled well. Even then, we could have made a difference if we could have batted a bit longer. It was our responsibility.

“It looked like a similar wicket (to the one in the first Test). If we batted first, it would have been a different story. Maybe they would have been in our position, and us in theirs. I don’t think a team needs a lot of spinners on this type of wicket. We have two very good spinners in our team, which I felt was enough,” Haque said.

Mominul remained hopeful of some of their young batters, who didn’t quite perform to the expected standard. He said that Saif and Shanto should be given enough time to establish their Test places. “Test cricket is very different than ODIs and T20s. It takes a bit of time in Test cricket, one needs a longer opportunity.

“I think it is difficult to get an instant result from a junior. Experience is very important in Tests. They can develop with time. I think they have realised that they need to improve their gameplan,” he said.