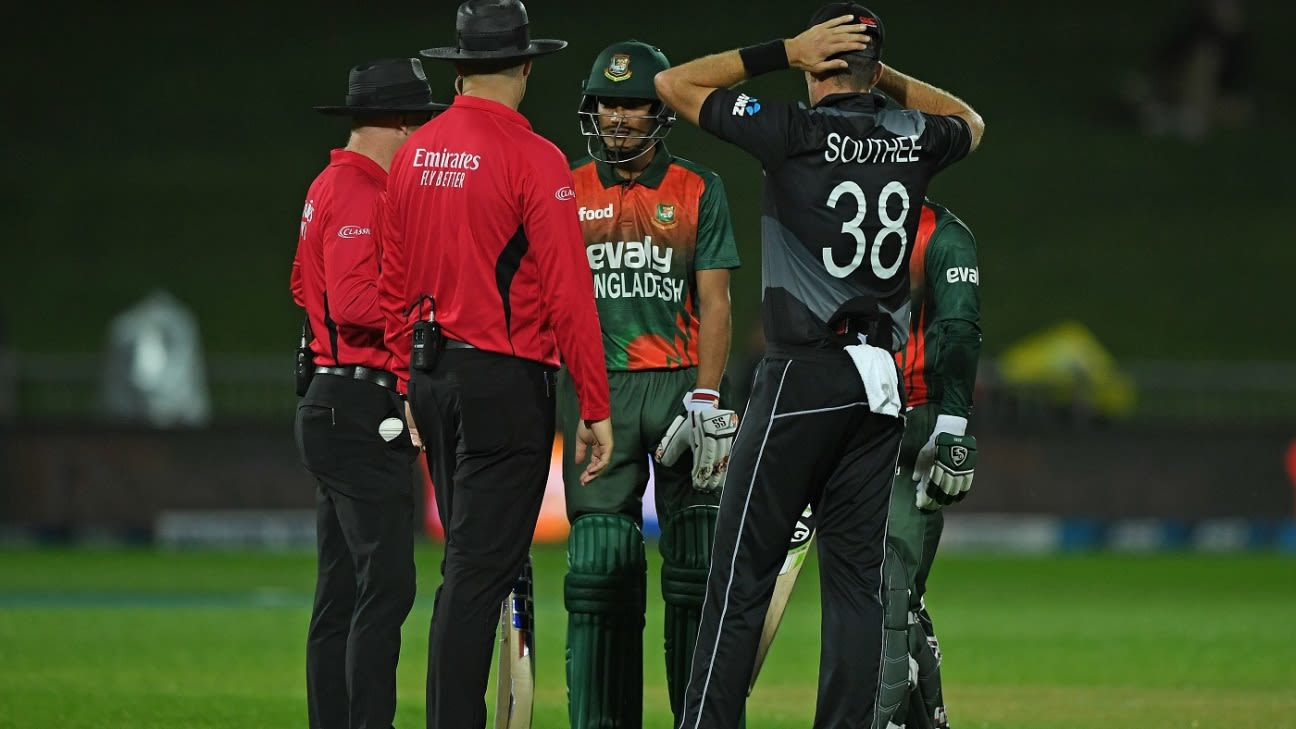 An ICC spokesperson said, “there was an operational issue at the ground” during the chase

Play had to be stopped in unprecedented circumstances soon after Bangladesh began their chase in the second T20I in Napier because of uncertainty around the eventual target and absence of DLS sheets.

The big screen, the official BlackCaps handle, the ICC website all said Bangladesh’s target in the rain-affected match was 148 in 16 overs, which was later corrected to 170, and then the eventual correct target of 171. However, it is not yet clear if the Bangladesh team, too, were given the wrong target at the start of the innings. What is certain is that neither side was immediately provided with DLS sheets with over-by-over par scores, which were crucial as it continued to rain.

Bangladesh were nine balls into the chase when play had to be stopped. Just before that, coach Russell Domingo and manager Sabbir Khan were seen having a conversation with the match referee Jeff Crowe. New Zealand had been forced off the field by rain after batting 17.5 overs, in which they had scored 173 for 5.

At the start of the chase, the scoreboard at McLean Park flashed 148 as the target, which was then changed to 170 and then 171 after the 13th over. Bangladesh eventually finished on 142 for 7 in their allotted 16 overs, falling 28 short according to the DLS method.

“There was an operational issue at the ground, which meant the DLS sheet could not be handed over to the teams,” an ICC spokesperson told ESPNcricinfo. “The target score was verbally communicated to the umpires at the start of the innings. However, play had to be halted after 1.3 overs as the teams requested for the DLS sheet to know the targets at different points during the innings. Play was resumed once the DLS sheets were provided to the teams.”

It isn’t clear yet what the operational issue was, though there appears to have been a mix-up in the DLS sheet that was handed to match referee Jeff Crowe. He is said to have recognised the target on that sheet was incorrect and asked for the correct version. What is clear, however, as Domingo said later, is that the teams should not have gone out on the field without updated DLS sheets in their hand.

That has been acknowledged by match officials and it is believed Crowe has since apologised to both teams for it. Neither did it help matters that the ground scoreboard showed the over-by-over par score according to the calculation that New Zealand had batted 20 overs, not 17.5. Had New Zealand batted 20 overs and posted the same score, the target would have been 148 in 16 overs.

Play is set to start at 9-40pm NZT with Bangladesh to have 16 overs. 148 their target. Follow play LIVE with @sparknzsport in NZ #NZvBAN pic.twitter.com/IRkcJ6xjlW

“I don’t think I have been involved in a game before where batters go out and don’t know what the DLS target is,” Domingo said. “There was a lot of rain around. Nobody had any idea of how many we needed after five or six overs. I don’t think the game should have started until it was finalised, before there was a clear indication of what is required, and what we needed at certain stages. I don’t quite think it [the conduct of the match] was good enough this evening.

“[When we met the match referee] they were still waiting for the printouts and calculations to take place. I think if you are waiting, the game can’t start before you get it. What was explained now was that they normally get it one or two balls into the innings, but hadn’t received it yet. They were waiting for it. There were delays and all sorts of stuff. No excuses [for the defeat], but this is just very frustrating for us.

“They couldn’t delay the game much longer, because they were running out of overs.”

Right and now we can play. 170 confirmed as what Bangladesh will need to win from 16 overs. Play returns at McLean Park. #NZvBAN pic.twitter.com/dIz2XWpNR7

There was a fair bit of confusion in the Bangladesh dressing room when the chase began.

“I don’t think a team fields for that long in that much rain,” Domingo said, also questioning the conditions in which the game was played. “It was slippery. The ball was wet. No excuses but it all seemed to be stacked against us this evening in terms of the conditions. I have never seen a game starting in rain when we came out for four or five overs. I don’t think the rules have changed but I was under the impression the covers don’t come off until rain stops.

“The first ball can’t be bowled until the rain stops. Maybe the rules have changed. I am not too sure.”

Price: (as of - Details) Water and dust resistant (4 meters for up to 30 minutes, IP68)Triple-camera system with 12MP Ultra Wide, Wide,...
Read more