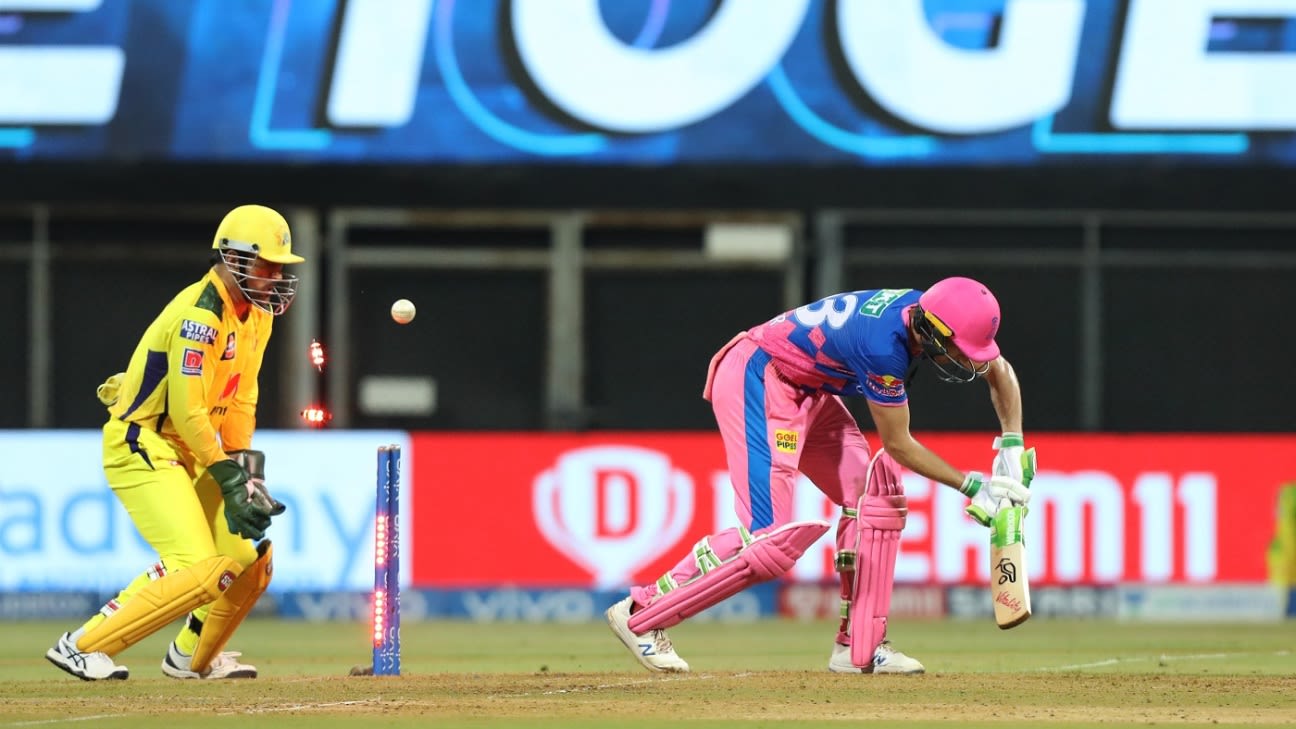 With Royals slipping from 87 for 2 to 95 for 7, they were beaten long before the match ended

A batting order that stretches all the way down to No. 11 continues to mask the Chennai Super Kings’ flaws – two very glaring ones at least. But the rest of their team is functioning pretty well. Too well as it turned out for Rajasthan Royals, who collapsed in the middle overs in a chase of 189, and were beaten long before the match ended.

The opener rising to the challenge
When Faf du Plessis walks out to bat, he knows he needs to score runs for two people, and he kinda seems okay with it.

Jaydev Unadkat probably wasn’t. He was left utterly confused as he leaked two fours behind the wicket and two sixes in front of it.

du Plessis’ innovation – he appears one of the few Super Kings batters willing to try unorthodox shots – helped them to 46 for 2 in the powerplay. And so long as he can do that, his under-fire partner has some room to breathe.

Ruturaj Gaikwad doesn’t have a power game and in all three of his innings so far he has looked very out of place.

The fading captain
There were so many times in the past that the arrival of MS Dhoni, with the score at 125 and six overs left in the game, would herald total destruction.

Here he faced 17 of the last 37 balls of the innings and made 18 uncomfortable runs. A run a ball for half the deliveries at the death is just not ideal at all.

The Royals deserve credit for that. They forced him to play spin, which he hates at the start of his innings, and their two left-arm quicks, Chetan Sakariya in particular, were brilliant with their changes of pace.

So it’s not just that Dhoni’s powers are fading. His opponents know just what to do to make them fade.

The end-overs rally
The Super Kings bat deep. And they just wouldn’t stop swinging. Sam Curran (13 off six) launched his second delivery for a jaw-dropping six over point. It is hard to reconcile his power and his frame. But he has it. And he uses it superbly.

Dwayne Bravo (20* off eight) was on it too, starting off with a vintage loft over extra cover and signing off with a six straight down the ground. The amount of effort he was putting into clearing the boundary was apparent when one time when he tried the bat just flew out of his hand and went halfway to fine leg.

Thanks to their efforts, the Super Kings made 45 runs off the last three overs to finish with 188.

The new Mr Super King
Last season he was their best hitter. And as a result of that the management is now giving him the chance to face more deliveries. Ravindra Jadeja walked out to bat in the 14th over tonight. And while he couldn’t reprise his big-hitting heroics from 2020, he has found his bowling groove again.

An impossibly beautiful delivery that bowled Jos Buttler was ample proof of that.

It pitched on middle and leg, at a spot and pace that didn’t allow the batter to push forward or back, and turned waspishly to strike the middle and off. Buttler was practically keeling over, his balance and his wicket both ripped out of his hands.

That kickstarted a Royals collapse. Five wickets – two to Jadeja, three to Moeen Ali – for just eight runs. And here are the names that were part of that procession. Shivam Dube, David Miller, Chris Morris and Riyan Parag. All potential match-winners. All undone in the tamest way. The first two lbw playing across the line. The next two caught slogging to the deep.

Alagappan Muthu is a sub-editor at ESPNcricinfo