Akansha Ranjan Kapoor Spent Day 3 Of The Lockdown Doing This 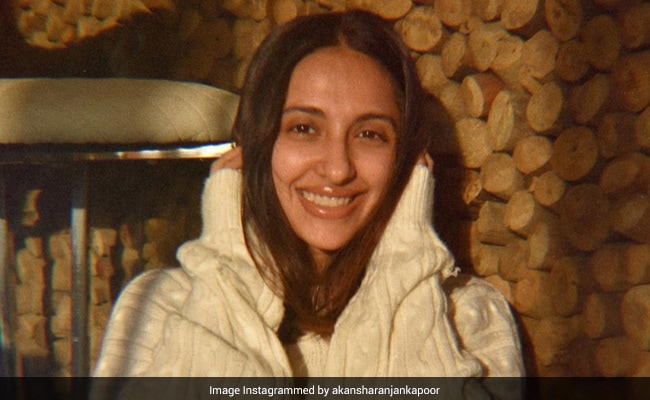 New Delhi: Akansha Ranjan Kapoor, who made her digital debut in Kiara Advani’s Netflix film Guilty last year, has posted a sneak-peak of how she is spending time during the lockdown in Maharashtra. Akansha’s latest post on her Instagram handle says it all. On Day 3 of lockdown, the actress posed for a photoshoot at her home and later shared a few pictures from the collection on the platform. In a few pictures of the series, Akansha can be seen flashing a beautiful smile. In other photos, she is giving an intense look. The actress opted for a white cropped sweater, black bralette and shorts. She kept her hair open and opted for a minimal lip gloss.

In her caption, Akansha revealed that she opted for “0 make-up” and chose one single filter for these photos. The Guilty actress added that she got around 100 pictures clicked for this photoshoot.

While Akansha didn’t mention the name of the filter in her caption, her BFF Alia Bhatt was quick enough to ask about it. Alia dropped her comment saying, “Which filter?” Akansha shared the name of the filter and photo editing app in her reply. Calling Alia a “curious cat”, Akansha wrote, “hehe a warm tone on VSCO with lots of grain…you curious cat.”

Akansha’s friend and model Diva Dhawan also commented on her post. She wrote, “Mood.” For those of you who don’t know, Diva is rumoured to be dating Aditya Roy Kapoor.

Akansha Ranjan Kapoor is Alia Bhatt’s best friend. Both of them often get clicked with each other and also take vacations together.

While Akansha is staying indoors amid the state lockdown due to the second wave of COVID-19, Alia recently tested positive for coronavirus and is self-quarantining at home.

In terms of work, Akansha was cast for the role of Tanu Kumar in her debut film Guilty. Kiara Advani played the lead role of Nanki Dutta and she was paired opposite actor Gurfateh Singh Pirzada in the movie. Guilty was based on #MeToo movement.

Alia Bhatt has Brahmastra, RRR and Gangubai Kathiawadi coming up.

Price: (as of - Details) Offering a rigid exterior of moulded-Eva plastic and a soft scratch-free interior, the Tizum universal travel case will...
Read more
Biometric devices

Price: (as of - Details) Offering a rigid exterior of moulded-Eva plastic and a soft scratch-free interior, the Tizum universal travel case will...
Read more

Mahela Jayawardene: Center-overs batting may just ‘nonetheless give a boost to’...